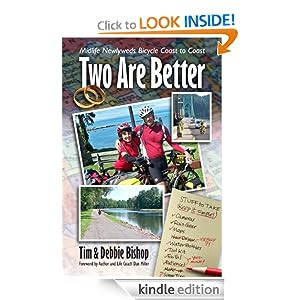 From the back:
Go for it! This unique and entertaining story proves it’s never too late to make your dreams come true. From an engagement to a cross-country trip in just ten weeks? And with no experience bicycle touring—or marriage! While Tim left behind a 26-year corporate career and familiar surroundings, Debbie was about to enter a “classroom” she hadn’t seen in 24 years of teaching. Was it a grand getaway or a big mistake?

My review:
Tim and Debbie Bishop are brave. They asked me to read and review Two Are Better, and I agreed, not realizing what an adventure I’d been given. My first shock was learning that the Bishops were my age when they undertook first-time marriage, followed by a cross-country bike trip for a honeymoon. My second shock was thinking, I wonder if I passed them, because some of the same roads they traveled out west were the same ones my husband and I took from the safety of our car, about the same time. We pass cyclists and shake our heads.

This book is not simply a travelogue, but a reflection on undertaking a life-transforming journey at what most people consider middle age. Changing one’s entire lifestyle by marriage is one thing, but then to go on a trip for which they both declared they were unprepared immediately thereafter is an interesting throw-you-in-the-deep-end method of learning to swim. The Bishops were honest about the trip and their feelings, and the events, throughout the trip.

Maps with the stops accompany the narrative, most of which is written by Tim, with paragraphs inserted in a different color by Debbie. My husband is a teacher, and I kept thinking while reading, he’d never, ever, allow himself to get home only hours before starting a new school year. He’s a different kind of teacher, though. I read the account also from a perspective of being married for more than half my life. It takes special people to be brave and blissfully ignorant to attempt a trip like this. I loved the photographs and accounts of crossing our country, what they learned about each other and themselves, as they traveled. While Tim’s style of writing occasionally waxes eloquently, a few quotes stuck out: “A delicate balancing act of making progress on multiple fronts was an instructional tutorial on married life.” “Most fears have some basis in reality, but we usually give them too much power….Everyone has the opportunity to come face to face with discovery.” And from Debbie, “Later, I came to realize that life as I had known it was gone forever....Although change may be more difficult [as we age], that doesn’t mean it can’t or shouldn’t happen. When we stop changing, we stop growing.”

This is a great book for couples at any stage of their relationship, whether or not you’re planning an adventure. The Bishops are also working on a tutorial book about bicycle touring.
Posted by Lisa Lickel at 9:19 AM