Meet Vivian Alderdice the Girl with the Dagger

The Girl with the Dagger: Vivian Alderdice in
The Waxwood Series 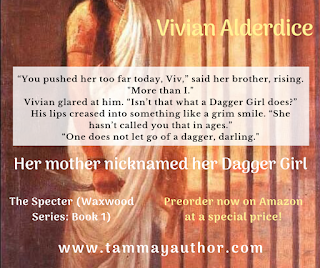 Vivian Alderdice is the unofficial main character (MC) of my upcoming historical fiction family drama, the Waxwood Series. The reason I call her the unofficial MC is that she’s not the sole MC of any of the 4 books in the series. But she is the character upon which the many themes of the series come to a head. She is present in all the books (the only character who consistently is), and her point of view, even when not the main one, is psychologically always present.

So what makes Vivian so special that she earned her place in a four-book series? The fact that she’s a Gilded Age debutante, caught right in the crossroads of an old century about to be hurled into the modern age is one reason. History writer and doctoral student Evangeline Holland writes of the Edwardian debutante in her blog Edwardian Promenade, and although the post mainly covers the first few decades of the 20th century, her point about the American debutante rings true for Gilded Age young women of wealthy families. Vivian comes from a wealthy and socially prominent San Francisco family and, like the Edwardian debutantes, becomes a woman when she reaches the age of eighteen. Until that age, she went about with long hair and shorter skirts. When she turned eighteen, her hair went up, her skirts lengthened, and she earned her first pair of “slippers” (the name for high heeled shoes at that time). But more than that, once she hits eighteen, she has a set of rigorous expectations placed upon her, namely, to marry as soon as possible and marry well (I.e., a man whose wealth and social standing is equal to the Alderdices).

Most Gilded Age young women accepted this as their fate. Indeed, they were conditioned by the separate spheres to believe this was their destiny. But I write about characters who are both a product of their time and rebels of it. So Vivian is different. Her own zest for life and her recognition of the hidden truths, evasions, and lies that make up her dysfunctional family tree have made her desire more out of life than what the Victorian separate spheres has to offer women.

In addition, her insightful personality makes it impossible for her to shy away from the unpleasantness of the past. Unlike her mother and brother, who have a “don’t ask, don’t tell” life philosophy, she faces adversity head-on. This is why Vivian is the Dagger Girl. She isn’t afraid to plunge the dagger into the heart of a matter and twist the knife. The problem is, sometimes her daggering hurts people she cares about and forces them to face demons they’re not ready to face.

There was no real life inspiration for Vivian, but she is the person I wished I was twenty or twenty-five years ago. At that time, I was blind to my own family dysfunctions, unwilling to dig for the truth and twist the dagger. Characters are often times a composite of people the author has seen and known or heard of, but I think they also frequently contain an element of the author that he/she wishes they were or had been.

Vivian didn’t start out as this kind of dagger-plunging character. I wrote here about how the Waxwood series evolved from a novel in three voices to a four-book series. The original character of Vivian (named Daisy) was a more passive character looking for a mother’s love and finding it in the most unlikely place. But when I conceived of the series, I knew I wanted to make Vivian more active, flawed in that she is too direct and truthful at times but also with the guts to face her demons and look back at the past. As I wrote The Specter, I related Vivian to her grandmother Penelope Alderdice, whose own dreams had been squelched by society’s expectations. Vivian emerged as a strong voice, a voice specific to the new century see-sawing between the old ways and the new promises of the modern age.

To what lengths will one go to exorcise a specter?

One rainy morning in 1892, people gather to mourn the death of San Francisco socialite Penelope Alderdice. Among them is a strange little woman named Bertha Ross, who claims to have known “Grace” in the 1850’s in the small town of Waxwood. But Penelope’s granddaughter, Vivian, has never heard of Grace or Waxwood.

Bertha reveals surprising details about Grace’s life in Waxwood, including a love affair with Evan, an artist and member of Brandywine, Waxwood’s art colony.Vivian’s mother, Larissa, insists Bertha is an imposter who has come not to mourn a woman she knew in her youth but to stir up trouble.

Vivian, however, suspects the key to her grandmother’s life and her own lies in Waxwood. She journeys to Brandywine where she meets Verina Jones, Evan’s niece, and discovers a packet of letters her grandmother wrote forty years ago about her time in Waxwood.

As Vivian confronts the specter that holds the truth to secrets buried in the family consciousness, she examines her grandmother’s life as a mid-19th century debutante and her own as a Gilded Age belle. Will she find her way out into the world as an autonomous being, or will she be haunted by the specter of her grandmother’s unhappiness all her life?

Tam May grew up in the United States and earned her B.A. and M.A in English. She worked as an English college instructor and EFL (English as a Foreign Language) teacher before she became a full-time writer. She started writing when she was 14 and writing became her voice. She writes historical and contemporary fiction about characters who must examine their past and the time in which they live to move on to the future.

Her first book, a collection of contemporary short stories titled Gnarled Bones And Other Stories, was nominated for a 2017 Summer Indie Book Award. She is currently working on a Gilded Age family saga, of which the first book, The Specter, is now available. She is also working on a historical mystery featuring a turn-of-the-century New Woman female sleuth. Both series take place in Northern California.

She lives in Texas but calls San Francisco and the Bay Area home. When she’s not writing, she’s reading classic literature and watching classic films.

For more information on Tam May and her work, feel free to check out her website at www.tammayauthor.com.

Email ThisBlogThis!Share to TwitterShare to FacebookShare to Pinterest
Labels: Tam May, Women's fiction