The Swaddling Clothes By Amber Schamel

Through the ages, many stories have been told about Mary, Joseph and the birth of the Messiah. Stories of shepherds and sheep, kings, angels, and stables. But there is one story that has never been told. One story that has remained hidden in the fabric of time. The story of The Swaddling Clothes. Mentioned not once, but several times in the Scriptural text, what is the significance of these special cloths? And how did they make their way into a stable in Bethlehem? From the author that brought you the Days of Messiah series comes a whole new adventure critics are calling "intriguing...thought provoking... a fresh twist on an age old story." "I get tired of Bible stories sometimes, but The Swaddling Clothes brings the story to life." "Heartwarming... truly inspired. A story you will want to read again and again. Rich details and a suspenseful plot will keep you reading while giving you a glimpse of God's wonderful power and His amazing love."


LINK to KINDLE | LINK to PAPERBACK

Amber Schamel is a multi-published author of Christian Historical Fiction. Her passion for history and culture has led her to travel extensively throughout the United States, Europe, and the Holy Land. Amber is actively involved in her church and enjoys volunteer work and music ministry. Raised in a family of twelve children and homeschooled throughout her education, she currently resides in the beautiful state of Colorado where she also serves as bookkeeper and marketing director for their family businesses. Find Amber on her blog, or on all the main social media sites.

Enter below to enter a $50 Amazon gift card, sponsored by author Amber Schamel! a Rafflecopter giveaway This book blast is hosted by Crossreads. We would like to send out a special THANK YOU to all of the CrossReads book blast bloggers!
Posted by Lisa Lickel at 12:30 AM No comments:

Hope in My Heart review 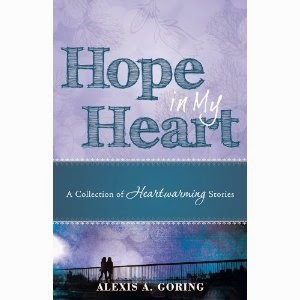 
Hope in My Heart is a collection of short, heartwarming stories with characters in need of hope. In "Love Unexpected" a car crash brings commitment-wary Sebastian and career woman Chandra together. Neither is looking for romance, but those around them see the potential, and Sebastian and Chandra discover that sometimes love shows up unexpectedly. Christmastime is the setting for the middle story, "The Best Gift" Christina desires to lose ten pounds so she can fit into her dress for her sister's wedding. Jordan wishes her mom would stop trying to marry her off. And Joshua hopes to be reunited with his ex-girlfriend but eventually learns that the best gift this Christmas will be the restoration of his relationship with God. In "Peace and Love" three characters living in a metropolitan area are desperately searching. Elle, a starving artist, aspires to become a paid professional. Eric, a divorce attorney, wants to resolve his issues concerning his parents' divorce. Kristine anticipates finding her birth mom before she marries Derek. All characters pray their searches will conclude this holiday season and fill their hearts with peace and love.

About the Author, Alexis Goring:

Alexis A. Goring is a college graduate with a degree in print journalism from Washington Adventist University in Takoma Park, Maryland. Writing is her passion. She hopes that her stories will touch hearts, bring smiles to faces, and inspire minds to seek God whose love for humanity is unfailing.
Visit her Website

My review:
Three short stories in one book - great snippets of sweet faith-based Christmas holiday romance and new starts for those who like their reading on the dash. These nicely set tales feature characters who have room to grow; men and women who realize life is bigger than their own little orbits. From the self-centered personal trainer to the lawyer who works and plays much too hard to notice a stable relationship has her own desk right outside his office, to the young lady looking for a job and a woman looking for her mom, there's something for everyone in Hope in My Heart. Kudos to Ms. Goring. Recommended for readers of love and romance and belief in persistence.
Posted by Lisa Lickel at 7:37 PM No comments:

Book Review: Snow on the Tulips by Liz Tolzma

ABOUT THE BOOK:
Astranger’s life hangs in the balance. But to save him is to risk everything.
The war is drawing to a close, but the Nazis still occupy part of the Netherlands. After the losses she’s endured, war widow Cornelia is only a shadow of the woman she once was. She fights now to protect her younger brother, Johan, who lives in hiding.
When Johan brings Gerrit Laninga, a wounded Dutch Resistance member, to Cornelia’s doorstep, their lives are forever altered. Although scared of the consequences of harboring a wanted man, Cornelia’s faith won’t let her turn him out. As she nurses Gerrit back to health, she is drawn to his fierce passion and ideals, and notices a shift within herself. Gerrit’s intensity challenges her, making her want to live fully, despite the fear that constrains her. When the opportunity to join him in the Resistance presents itself, Cornelia must summon every ounce of courage imaginable. She is as terrified of loving Gerrit as she is of losing him. But as the winter landscape thaws, so too does her heart. Will she get a second chance at true love? She fears their story will end before it even begins.
MY REVIEW:
Snow on the Tulips draws the reader into the deprivation, stress and terror of everyday life under Nazi occupation. Even good people with good intentions are fearful of doing more than the bare minimum of good works; those serving the resistance are afraid but willing to sacrifice themselves to help those who cannot help themselves. When the two sides meet, the clash means uncomfortable compromise or ultimate sacrifice.
Told through the eyes of Cornelia, her sister Anki, and Gerrit, the love interest, the story unfolds toward the end of WWII in occupied Netherlands. Cornelia barely had a chance to experience adult life when she was widowed; Anki married a man of uncompromising faith which rendered him untrustworthy to those who broke the law; Gerrit’s recklessness was borne of betrayal and helplessness to protect a family member. Each has internal demons to fight, besides the enemy’s destruction of the life they knew before the war. Forgiveness is at best difficult, but it’s a joy to watch Cornelia overcome her prejudices and grow into a woman who is capable of living the life to which she’s called.

What I loved most about this story is that it comes from family history. Tolsma draws upon stories from her relatives, from the cousin whose husband went to war the day after the wedding, to the man who survived a group execution, to the copious interviews and dedicated details, Snow on the Tulips is historical dramatic romance of high caliber. 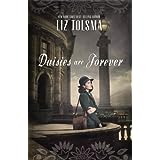 The second book in the series which releases May 2014, Daisies Are Forever, is now available for pre-order.

Gisela must hold on to hope and love despite all odds in the midst of a war-torn country.
Gisela Cramer is an American living in eastern Germany with her cousin Ella Reinhardt. When the Red Army invades, they must leave their home to escape to safety in Berlin.


ABOUT THE AUTHOR:
Liz Tolsma has lived in Wisconsin most of her life, and she now resides next to a farm field with her husband, their son, and their two daughters. Add a dog and a cat to that mix and there's always something going on at their house. She’s spent time teaching second grade, writing advertising for a real estate company, and working as a church secretary, but she always dreamed of becoming an author. When not busy putting words to paper, she enjoys reading, walking, working in her large perennial garden, kayaking, and camping with her family. She'd love to have you visit her at www.liztolsma.com or at www.liztolsma.blogspot.com.
Posted by Lisa Lickel at 12:30 AM No comments: